1. The “Girl next door”. Sweet, approachable pie baking loveliness. Think Bettie Page and the work of Gil Elvgren.
2. The “Femme Fatale”. Distant, elegant goddess type. Think Greta Garbo and the work of Alberto Vargas.
3. The “Vamp”. A ‘scary but sexy’ slinky creature of the night who cares not a jot for your social standards. And my kinda girl!

The look typically includes a very chinched waist, long straight hair, elaborate makeup, tight long dresses that leave little “to the imagination” and black…..or very dark red.  Infamous Vamps include Morticia Addams, Elvira Mistress of the dark, and the often overlooked Valeria Watt from the magnificently camp “carry on screaming”, who caused some stirrings in the young me I must say…and I don’t think I was the only one!. But there was one who was not only a sultry, campy, fabulous creature of the night, but a serious trailblazer and icon of the dark-glam look and the punk and goth lifestyles.
That woman was, one of my heroines Maila Nurmi. Original and best. Born December 11, 1922 in Petsamo, Finland, Died: January 10, 2008 (age 85) in Los Angeles, California. She is believed to have been the first horror host. The story goes that she threw together a costume for a party, choosing Morticia Addams from the comic strip. And the character of Vampira emerged from there, inspired by the likes of Joan Crawford and the evil Queen from Disney’s Snow White (well who doesn’t love her?).
But she was more than that, I mean look at her!  That first pic is classic vintage pin-up girl, with a punky Burlesque twist. That second one…WOW! Can you imagine seeing that on TV in the 50s? And in the third, we are decades before Punk or Goth or Deathrock and there she is. True original. Real icon. 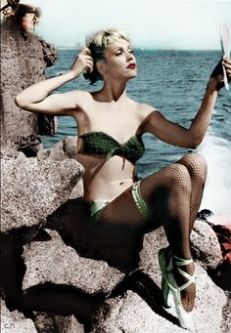 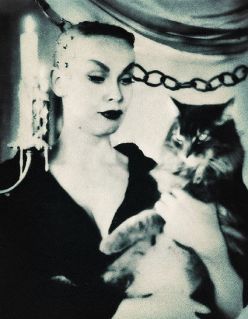 For these and more pictures and info on one of the greatest originals of her time, check out my Pinterest board dedicated to Vampira.