So last week I was so busy actually making Halloween props that I didn’t have time to blog about them! lol.
But as promised I shall do so now.

One of the props for this year’s witchcraft and wizardry theme party I love the most is my mandrake. 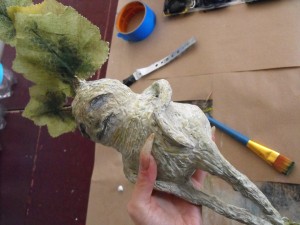 Mandrakes are a real plant…no they were not made up for the Harry Potter books.
They are a member of the nightshade family and are poisonous. Containing alkaliods including atropine.
The plant’s root is similar in appearance to a parsnip but often resembles a human body.
They have long been used in rituals and have many superstitions attached to them. Including the one in the Harry Potter books, that when they are pulled up they scream and the scream will kill anyone who hears it. The Harry Potter books actually have loads of real-world occult references in them, but that is a post for another day.

It is mentioned in the bible more than once and seems to be seen as some kind of aphrodisiac or a conception aid for women (for women obviously because it never occurred to ancients that it could be the man who was “barren”) Though some scholars have suggested that the plant they meant to refer to was ginseng which can look like mandrake but does have sexy qualities …rather than poison like the mandrake, makes sense.

A more interesting literary reference is Mandragoria by Machiavelli. In which a mandrake potion is used to seduce a woman. Hmm perhaps he should have tried ginseng too.

Anyway back to the point – I used the Harry Potter film prop Mandrakes as my inspiration and made an armature from kitchen foil.

Foil eggs for armature base

Then wrapped it in drywall tape (or masking tape) and coated with paper mache clay. 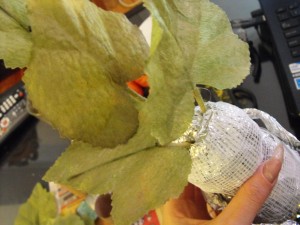 I sculpted a rough indication of a face and attached leaves and roots. And carved a lot of texture into the body. I used pumpkin leafs and tendrils from a pumpkin garland because that is what I had. Mandrakes have longer darker leafs, but accuracy was not the big point.

I painted on a base coat of white mixed with a little green then using pastels I rubbed browns over the surface. The deep texture making it easy to get a tonal effect.
Then I added some shading with charcoal.

I set it up on the dining table on a chopping board, with a letter opener, a bit of my jade plant, some Spanish moss, a plastic cauldron, a pewter goblet and an old book of Shakespeare with a rubber snake and plastic scull sitting on top to hide everywhere it said “Richard III” lol.

What do you think Kittens?

Have a magical day.