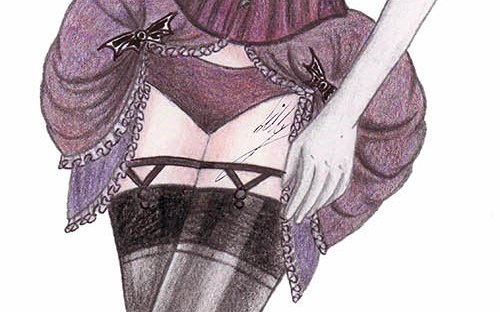 I have to share because this is a really good article.
One of the things I am very aggressively apposed to is the concept of shame…shame generally, but sexual shame is the worst. I causes only confusion, pain, self loathing, fear and abuse.  Sex-Ed does need to be taught properly.
People say “Sex is overrated” I say no. The MYTH of sex is overrated, but the real thing is almost entirely ignored. This is a problem and shame has a lot to do with it.
They say that all of our ‘problems’ come down to fear. That sounds like waaayy too much of an oversimplification. But when you actually take some time and think about it, most everything does come back to some kind of fear response. Prejudice is a fear response and so is shame.
This is why I make no fancy explanations for artwork of mine that is clearly (or could be interpreted as) sexual. I do not need a justification because sex is not wrong. It is not something that should be looked down on and kept quiet in the corner.
I don’t make pornography because pornography isn’t sex. But I have sexual elements in my work because there is a sexual element to me. No apology. No explanations.
If there is not a sexual element to you then that’s equally fine (seriously WHY does this have to be so complicated? grow up) But I will never justify either my work or my physical appearance to anyone, because I have no sexual shame, nor should anyone else.
Let us be the generation that frees the next generations from living with this bullshit.
Read the article here –
http://markmanson.net/sex-education/

If you have the time check out this article by the same writer – http://markmanson.net/disney/. “How Disney ruined sex for everyone”. It is an interesting read and follows the lines of my frequent expression “Cut the Disney crap!” lol.